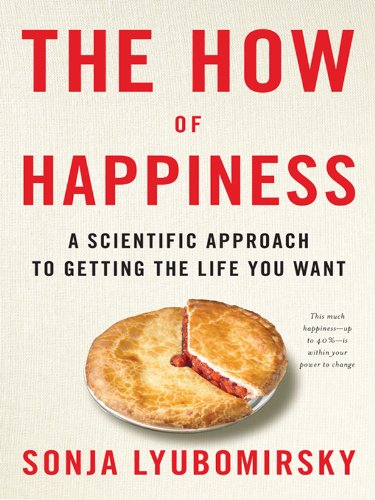 “People who regularly practice appreciation or gratitude—who, for example, “count their blessings” once a week over the course of one to twelve consecutive weeks or pen appreciation letters to people who’ve been kind and meaningful—become reliably happier and healthier, and remain happier for as long as six months after the experiment is over.”

“It may be obvious that to achieve anything substantial in life—learn a profession, master a sport, raise a child—a good deal of effort is required.”

A more descriptive title for the book

Happiness guides suffers from the same problem that meditation guides do: namely that most of them go out of their way to be as un-scientific as possible. Preaching all sorts of totally absurd ideas without providing any real proof of any of these things, all the while claiming them to be scientific anyway.

This book does not suffer from this problem.

I lost count of the number of scientific studies the author describes here. It’s a breath of fresh air when most happiness books are only good as toilet paper.

The author, Sonja Lyubomirsky, is a professor in the Department of Psychology at the University of California and has actually conducted her own studies on methods to improve people’s happiness and has studied the other evidence in existence for other methods to improve people’s happiness too. Here’s a taste of some of the stuff that’s in this book:

“An impressive study of physical activity was published in the Archives of Internal Medicine in 1999. The researchers recruited men and women fifty years old and over, all of them suffering from clinical depression, and divided them randomly into three groups. The first group was assigned to four months of aerobic exercise, the second group to four months of anti-depressant medication (Zoloft), and the third group to both. The assigned exercise involved three supervised forty-five-minute sessions per week of cycling or jogging at moderate to high intensity. Remarkably, by the end of the four-month intervention period, all three groups had experienced their depressions lift and reported fewer dysfunctional attitudes and increased happiness and self-esteem. Aerobic exercise was just as effective at treating depression as was Zoloft, or as a combination of exercise and Zoloft. Yet exercise is a lot less expensive, usually with no side effects apart from soreness. Perhaps even more remarkably, six months later, participants who had “remitted” (recovered) from their depressions were less likely to relapse if they had been in the exercise group (six months ago!) than if they had been in the medication group”

The book is a series of different exercises you can apply to make your life happier, which have been implemented for other people and measurably improved their happiness for the long term.

How it helped me

Happiness is a slippery thing, but this book has made it profoundly less slippery and I feel I have a firmer grasp on it now.

Things like the importance of variety to ensure that you don’t just get used to certain activities was huge for me. Previously I used to do gratitude journalling every day, but as she points out, it’s too much, you just get used to it, you adapt to it, and it loses it’s impact on you, and she was totally right. So now I do my gratitude journalling once every three days and I actually really enjoy it now. As well as writing appreciation letters to friends a couple times a month which is very satisfying.

The book points out that about 50% of our happiness is determined by our genetics, 10% from our circumstances (because we just get used to them) and 40% from our own voluntary control. This was useful to help me consider just how much I have to work with.

I was motivated to exercise, and as a result of reading this I started training Muay Thai Kick-Boxing, which I’ve been loving.

In order to “Cultivate Optimism” I did Jordan Peterson’s Future Authoring Program and set my long term goals. And one of the immediate benefits of that has been completely rethinking the way I spend my leisure time, which I previous completely wasted.

I implemented the writing exercises for the “Dealing with Trauma” chapter which has helped my rethink previous bad experiences I’d had, with an ex-girlfriend and a previous job, for example, which was fantastic.

And I started actively trying to be more cheerful when I talk to strangers, which gives me a little boost each time I do it.

There’s still a lot left to implement in the book, but so far so good. This is the most useful book on happiness I’ve ever read.

The book is kind of like a choose your own adventure story, where it has 12 different types of happiness exercises, with a few different versions of each (roughly 30 different activities in total). The author tells you to choose the activities to implement, one at a time, based on your personality, so as to ensure you ACTUALLY implement them.

Each exercise includes the scientific proof to support the claim that the exercise improves your happiness and usually includes some interesting anecdote as an example of someone who implemented it.

I highly recommend you read this book.